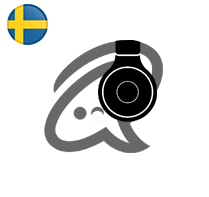 About the Swedish language

Swedish (svenska) is a North Germanic language spoken natively by at least 10 million people, predominantly in Sweden and in parts of Finland where it has equal legal standing with Finnish. It is largely mutually intelligible with Norwegian and Danish, although the degree of mutual intelligibility is largely dependent on the dialect and accent of the speaker. Written Norwegian and Danish are usually more easily understood by Swedish speakers than the spoken languages, due to the differences in tone, accent, and intonation. Swedish is a descendant of Old Norse, the common language of the Germanic peoples living in Scandinavia during the Viking Era. It has more speakers than any other North Germanic language.

Standard Swedish, spoken by most Swedes, is the national language that evolved from the Central Swedish dialects in the 19th century and was well established by the beginning of the 20th century. While distinct regional varieties and rural dialects still exist, the written language is uniform and standardized.