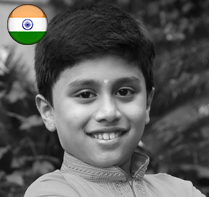 About the Hindi languague

Hindi, or more precisely Modern Standard Hindi is an Indo-Aryan language spoken chiefly in North India. Hindi has been described as a standardised and Sanskritised register of the Hindustani language, which itself is based primarily on the Khariboli dialect of Delhi and neighbouring areas of Northern India Hindi, written in the Devanagari script, is one of the two official languages of the Government of India, along with English.It is an official language in 9 States and 3 Union Territories and an additional official language in 3 other States.Hindi is also one of the 22 scheduled languages of the Republic of India.

About the Marathi languague

Marathi is an Indo-Aryan language predominantly spoken by Marathi people in the Indian state of Maharashtra. It is the official language of Maharashtra, and a co-official language in Goa and the union territory of Dadra and Nagar Haveli and Daman and Diu. It is one of the 22 scheduled languages of India, with 83 million speakers as of 2011. Marathi ranks 10th in the list of languages with most native speakers in the world. Marathi has the third largest number of native speakers in India, after Hindi and Bengali. The language has some of the oldest literature of all modern Indian languages, dating from around 600 AD. The major dialects of Marathi are Standard Marathi and the Varhadi dialect.

About the Kannada languague

Kannada, less commonly known as Kanarese is a Dravidian language spoken predominantly by the people of Karnataka in the southwestern region of India. The language is also spoken by linguistic minorities in the states of Maharashtra, Andhra Pradesh, Tamil Nadu, Telangana, Kerala and Goa; and also by Kannadigas abroad. The language had roughly 43 million native speakers by 2011.Kannada is also spoken as a second and third language by over 12.9 million non-native speakers in Karnataka, which adds up to 56.9 million speakers. Kannada was the court language of some of the most powerful dynasties of south and central India, namely the Kadambas, Chalukyas, Rashtrakutas, Hoysalas and the Vijayanagara empire. It is one of the scheduled languages of India and the official and administrative language of the state of Karnataka.